A Day in Brunei – the Smiling Sultanate

I didn’t know what to expect of the tiny, oil-rich sultanate of Brunei Darassalem. Online reviews noted a country that was “no fun”. Other than that, I had few preconceptions of this small country that just happened to be a convenient stop on my return journey from Sabah to Bangkok.

After arriving, I checked into the well-known Empire Hotel, an enormous property just under 20 miles outside of the city and featuring one of Asia’s top golf courses. The hotel felt eery due to its sheer size – I had to walk the length of a football pitch just to reach my room – with no one around.

The following morning, I headed into town to find out what Brunei was all about. As the city unfolded before me, I recognized in it some essence of Singapore – not the downtown Singapore we all think of, with its towering skyscrapers and designer shopping, but rather its tranquil and immaculately clean suburbs.

The capital city – called Bandar Seri Begawan – is heavily Islamic, with colorful mosques peeking out through the skyline and women sporting the tell-tale headscarves. There was little traffic, and I was surprised not to see many motorbikes on the road – normally a staple mode of transportation in Southeast Asia. Not once during my entire visit was I to hear a car horn, something that I was told was quite normal here. The people seemed friendly, gentle, and polite. I noticed from doing an image search prior to my trip that there weren’t many photos of Bruneians online – therefore I decided to make it a goal to meet and photograph as many people as I could in addition to seeing some of the main landmarks. 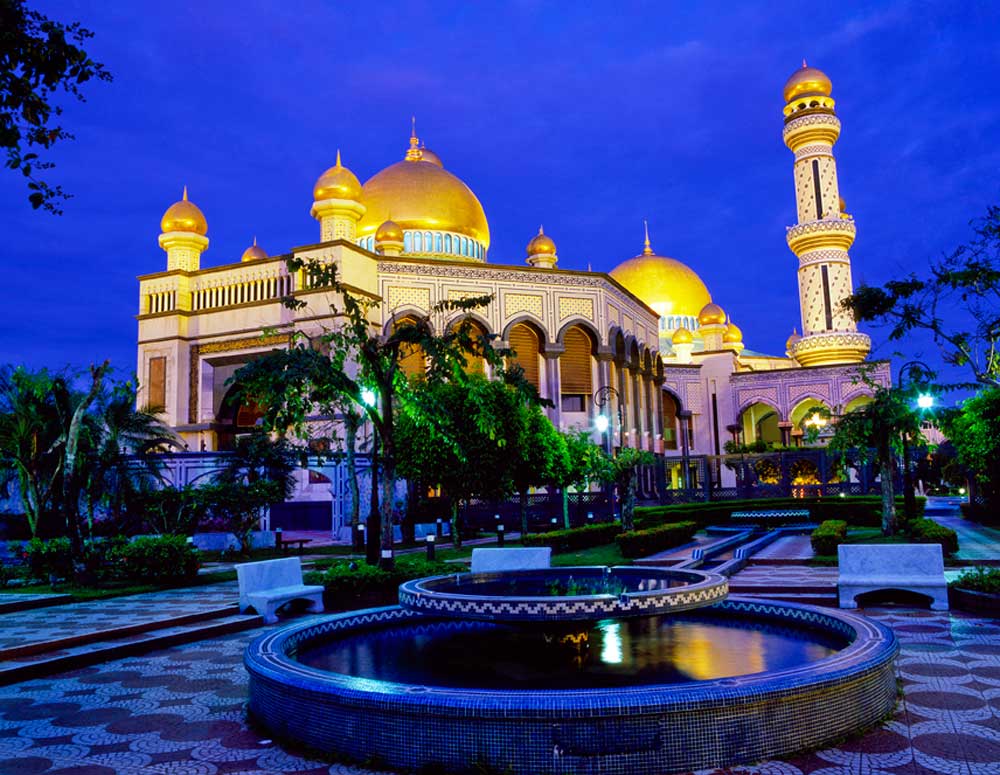 Our first stop was at the largest mosque in the country, built to commemorate the 25th anniversary of the Sultan’s reign. It was impressive, with large blocks of marble incorporated into many aspects of its design. We were told that visitors are not permitted into the mosque at prayer time, and outside of prayer time, it was very quiet. After chatting with a few men working within the mosque, we departed. 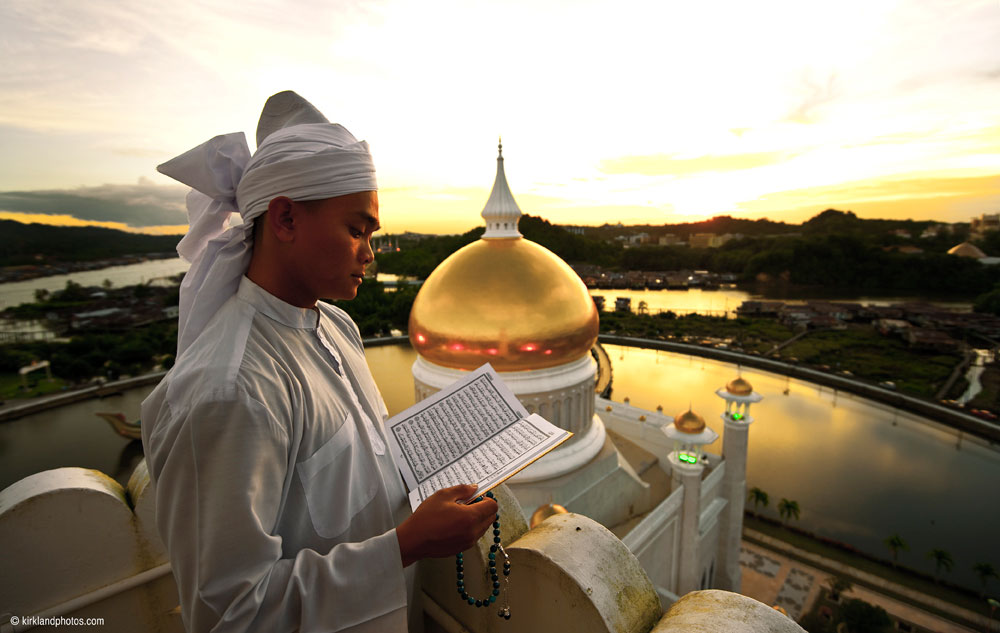 Without a doubt Brunei’s most recognizable landmark, and most photographed,  is the Sultan Omar Ali Saifuddin Mosque. The most striking element – besides, once again, the abundant use of gold, which coated the entire area of its huge dome – was a life-sized reproduction of the ceremonial floating barge that sits in the waters in front of the mosque. Completed only six decades ago, this mosque is known worldwide as a symbol of modern Islamic architecture, uniting Mughal techniques with Italian styles. 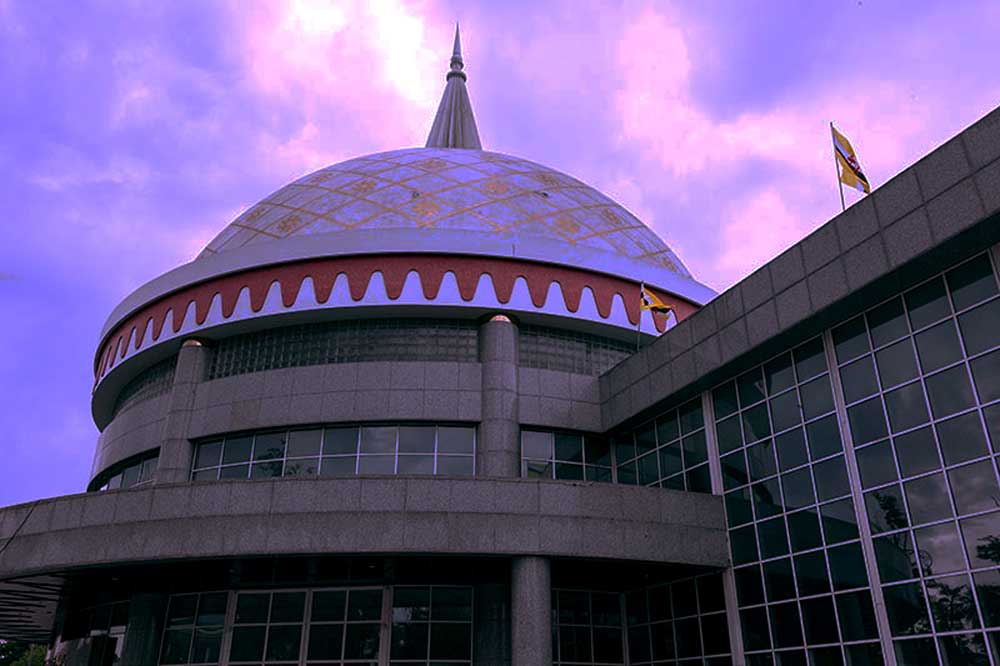 After having visited the city’s two most famous mosques, it was time to hit a museum. We ventured into the Royal Regalia Centre, dedicated to the country’s current Sultan. On display were chariots from his coronation and Silver Jubilee, gold and silver jewelry, and displays reenacting key moments from the Sultan’s coronation, which was clearly a key part of the country’s history. I learned some interesting history about Brunei here, but we didn’t stick around long. 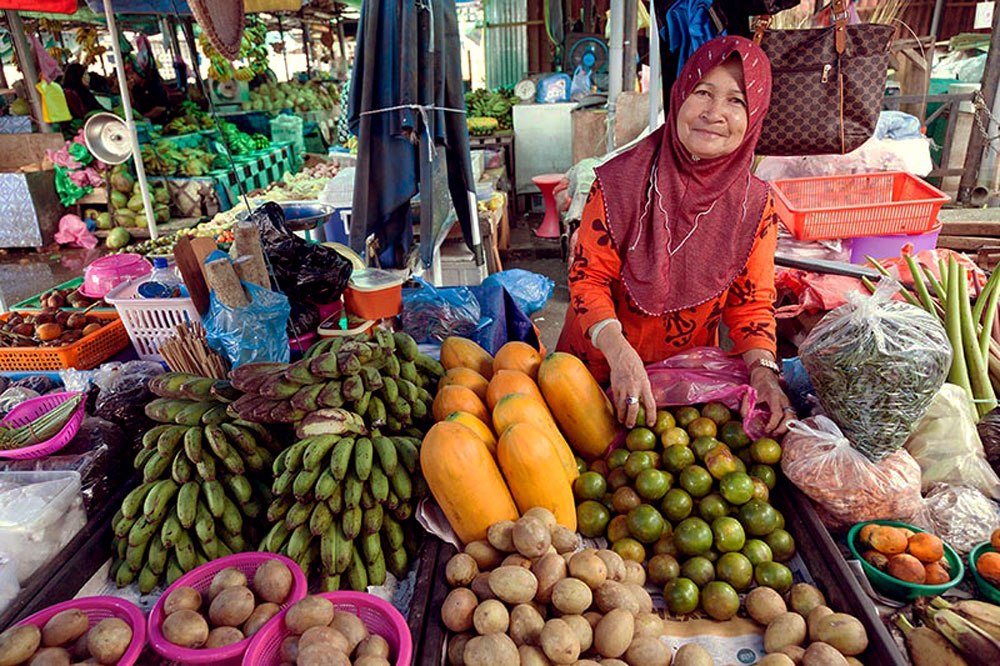 We lunched on delicious Malay food at a local restaurant and then headed to a local market, overflowing with fresh local vegetables, fruit, and dried fish products. I always find the markets to be a great place for encounters with the locals, and this was no exception. I met many friendly vendors and shoppers here, who flashed ear-to-ear smiles at me as I approached and left. I could see that the place hadn’t yet been affected by mass tourism, which could (and usually does) result in big changes. 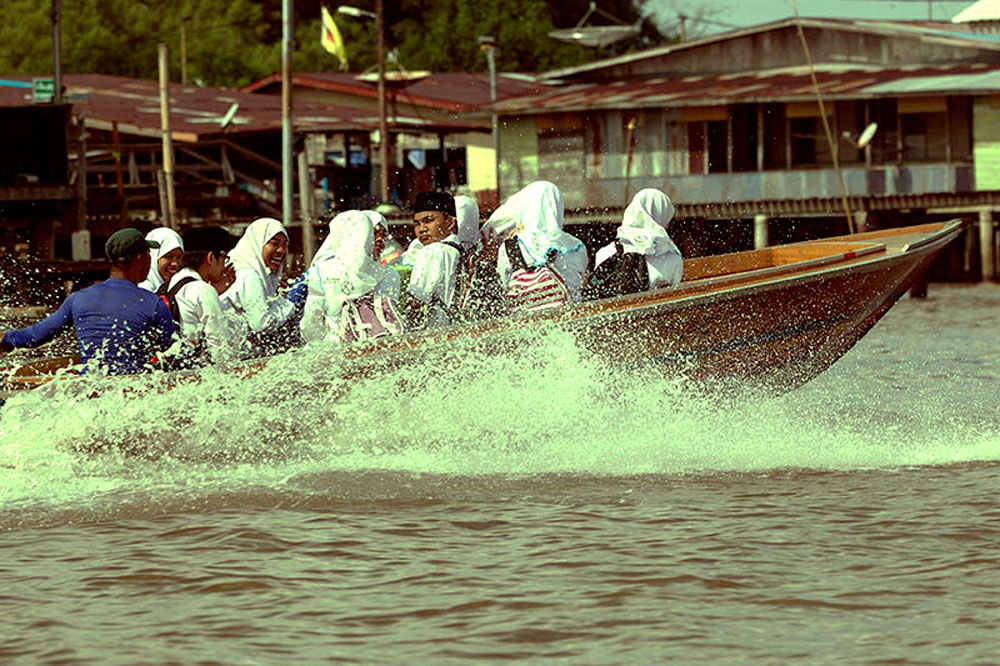 Next we raced at high speed across the calm nearby river in a water taxi, which brought us to the Kampong Ayer Water Village. Boats flew past in every direction in what seemed to me a very reckless manner – some rules of the river would go a long way here, I thought to myself. With a population of just under 40,000 people and nearly 100,000 feet of footbridges linking smaller villages within the area to one another, this wasn’t a tiny development. 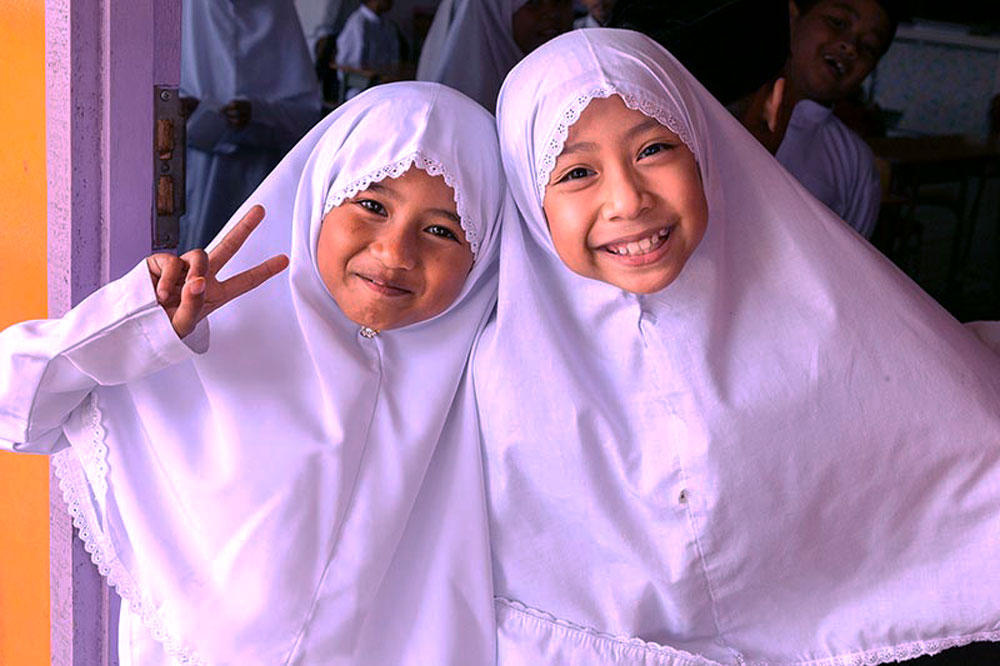 Some friendly girls outside of their school.

When I saw a group of students getting dropped off at their floating school, we went over to say hello. Judging by their reactions, we were among the first Western people to ever do such a thing! They smiled for photos and danced around upon our arrival, clearly excited by the novelty of our visit. We also had the chance to visit a local home in Kampong Ayer, though I was disappointed to discover it was merely a tourist trap. I asked my guide to take me to an authentic home within the village, which he did. Here, I had the chance to meet a local family and see how they lived in their floating house. Much to my surprise, all the houses appeared to be equipped with electricity and plumbing, unlike those in other Southeast Asian countries like Vietnam, Cambodia, and Malaysia. 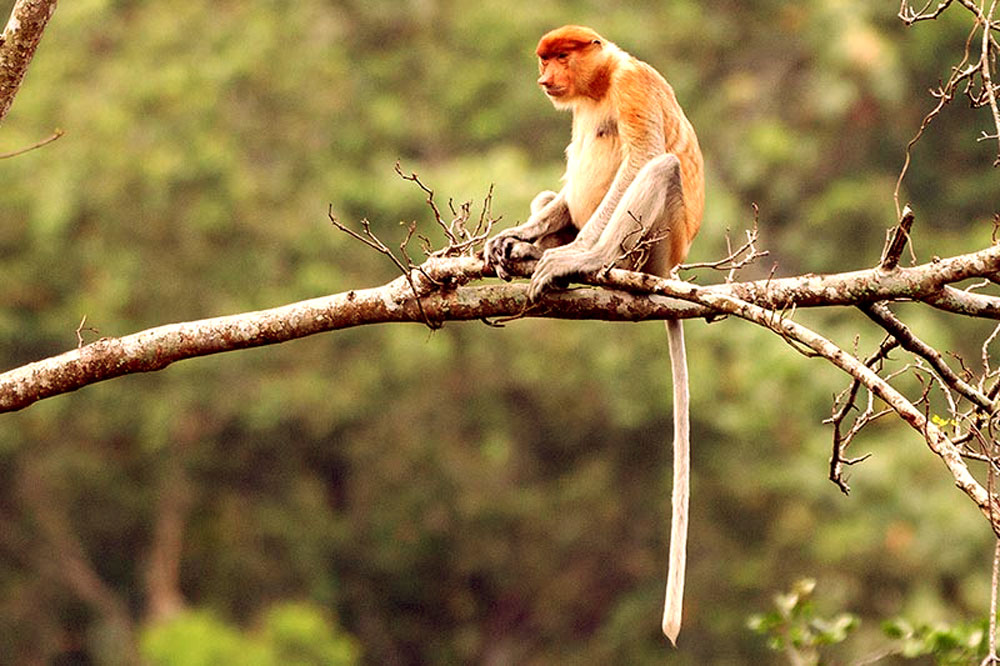 A Proboscis monkey in the mangrove forest just outside of town.

We continued along the river, this time to an area outside of the city covered in mudflats and mangrove forest. I was disappointed that it was high tide, since I’d been told that at low tide, the area was crawling with crocodiles. We did have the fortune, however, to see several troupes of Proboscis monkeys – not surprising however, since this is their favored home in the area. The groups are usually heralded by one male with his harem of females and babies. Having just been spoiled by Sabah’s abundant wildlife, I felt a little underwhelmed to have not seen a more active jungle culture, but those passing through Brunei will likely find this a nice experience. I didn’t have the time, but if I had, I would definitely have headed to Ulu Temburong National Park. The park is blanketed by pristine rainforest, and has a quickly-developing eco-tourism industry. 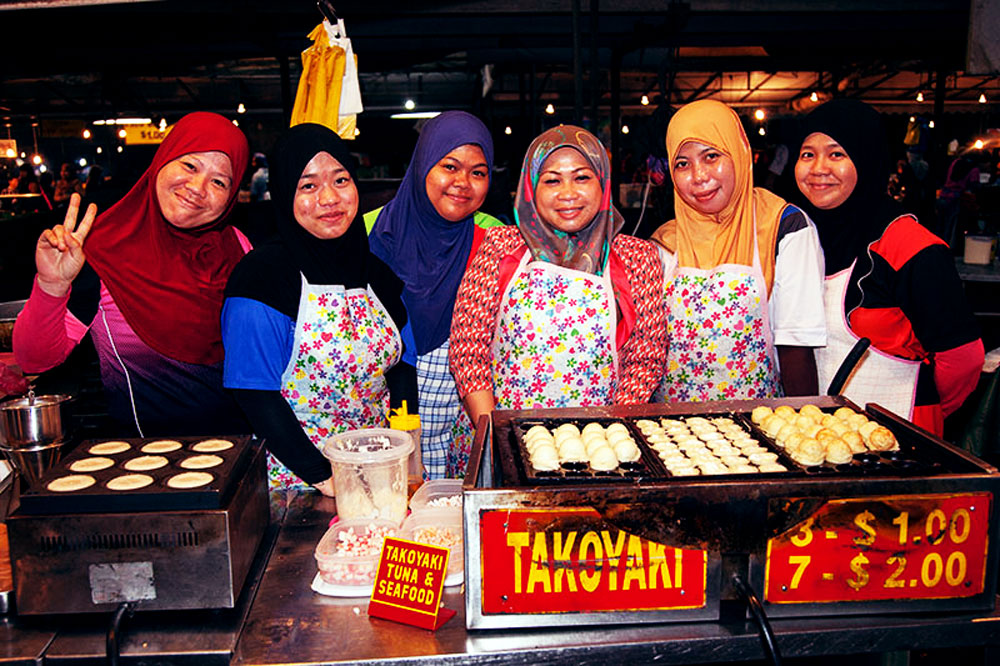 The Pasar Gadong night market is an excellent place to try the local food and meet people.

Upon my return from the river, I moved to the Radisson Hotel in the downtown core. After a quick rest, I headed out once again, this time to visit the night market. Though not sprawling like many night markets I’ve been to, Pasar Gadong was extremely clean (this was becoming a theme), and I was surprised by how appetizing the food looked. Fresh, vibrant fruits and vegetables lay aside thick cuts of lamb, grilled fish, sausages, and beef, with noodles, satays and other Malay food, and there was even one stand selling hamburgers Brunei-style. The vendors flashed me their friendly Brunei smiles, as I approached them to sample their wares. The night market is open year round, from 4pm – 11pm, and is an ideal place to sample local food and meet the people.

During my short time in the country I learned why – or at least partly why – the people of Brunei are so happy. The social system is substantial, with no income tax, gas at 30 cents a litre, free medical care, and significant housing subsidies.

Overall, I feel that Brunei gets an undeserved bad rep. It may not be the most exciting destination with no bars or nightlife, but for a short visit it offers plenty to do and see. The real charm in Brunei is the people, who are amongst Asia’s friendliest.

Here’s a link to the website to read more interesting articles available: