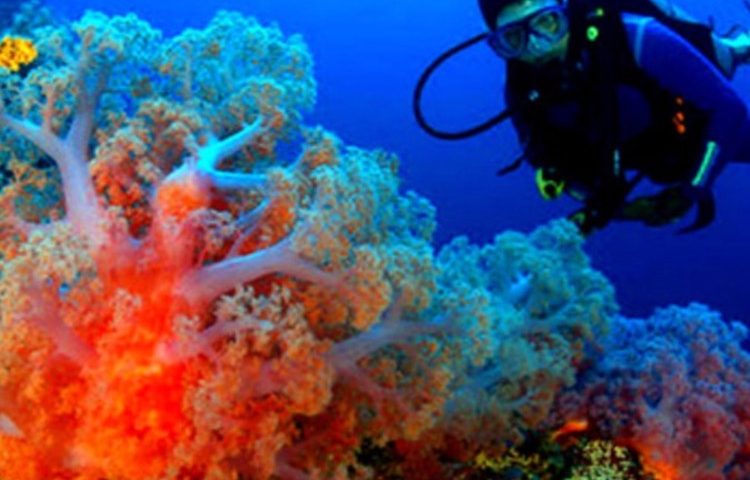 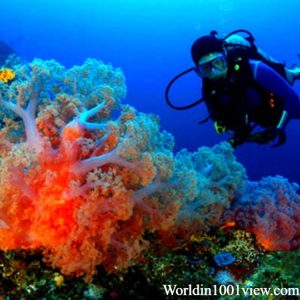 If you like diving as much as we do, you probably have Indonesia high on your list of destinations to visit. Or if you have never tried diving before and want to find out what all the fuss is about then this article is for you. From sunken fighter planes to active volcanoes TripCanvas has listed 11 of the most unique dive sites that Indonesia has to offer. We have selected our favourite 5 to wet your diving appetite. 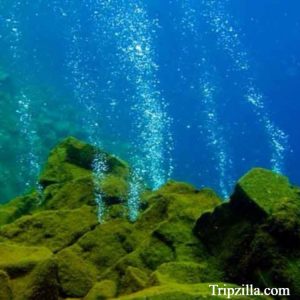 In Indonesia’s typically wild fashion, the country is home to one of the dive-able active volcanoes in the world. Yes, this volcano, called Mahengetang, is constantly releasing sulphur from the earth although it hasn’t officially erupted since more than 50 years ago. Mahengetang begins 400 metres below sea level and rises to just 8 metres below the surface.

Visitors, who reach the area by boat, can descend over the crater of the volcano, which is called Banua Wuhu. In crystal clear visibility, divers can explore pristine reefs with giant sponges and a plethora of marine life. Barracuda and mackerel flock to the area for the warm waters caused by the release of Earth’s gases. On occasion, divers can even hear the rumblings of moving earth far below. It’s imperative to exercise caution when swimming among the sulphuric bubbles. They are extremely hot and can easily burn your skin. Ask your dive operator for advice on which wet-suit is most appropriate for this type of environment.

Dive type: Pinnacle
Difficult elements: Not difficult, but be careful around sulphur bubbles as they can burn the skin
Required certification: Open Water
Level: Beginner
Max Depth: 19-21 metres
Average Visibility: 37-40 metres
Average Water Temperature: 37-38℃
Best Season: March to early November
Getting There: In order to reach Banua Wuhu, you must first fly to Manado in North Sulawesi. From Manado, if you intend to dive, you must join a liveaboard trip to Banua Wuhu. If you do not intend to dive, you can take the local ferry to Siau or Sangihe and then hire a speedboat to take you to the volcano.

2. Dive to the dark core of the earth: Kupang Freshwater Caves 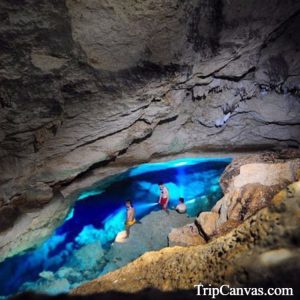 This site is for fearless explorers in search of a thrilling adventure. In West Timor, Kupang City plays host to a series of caverns that are still being discovered. So far, two have been partially mapped: Crystal Cave and Oehani Cave. The caves constitute a labyrinth of freshwater diving. They stretch for an unknown number of miles beneath West Timor.

Stalactites and walls of fossilised shells adorn the caves. Occasionally, ancient skeletons can be found on the floor of the site. Crystal clear visibility means divers can see everything their light touches. Without a light, pure darkness descends. Here in these caves, divers can experience a total blackness that is unknown in most other parts of the living world.

However, this dive is not a walk in the park and should be attempted only by divers trained in cavern diving. Haloclines and thermoclines give advanced divers enough challenge to stay interested, not to mention the fact that they are often exploring unknown territory. Luckily, there are air chambers scattered throughout the caves to give divers a bit of rest.

Dive type: Cave
Difficult elements: Confined spaces (buoyancy); Thermoclines
Required certification: Cavern Diver
Level: Advanced
Max Depth: 28 metres
Average Visibility: >30 metres
Average Water Temperature: 26-28℃
Best Season: March to October
Getting There:
1. Your journey begins by flying to El Tari Airport in Kupang. If you wish to dive in the caves, head to the Dive Kupang Dive (address below).
2. If you simply want to visit the caves, hiring a local guide is a good idea as they can be difficult to locate and dangerous to explore. (Getting to the cave: 1. From the town, head towards Bolok ferry port. 2. Stop at Boloair police station 3. There will usually be people manning the parking area and offering guides) 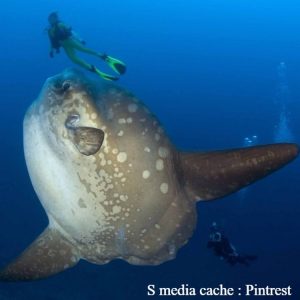 From August to October, Crystal Bay in Nusa Penida is Indonesia’s premier destination for seeking out the Bali Sunfish or Mola Mola, which is one of the 5 creatures you won’t believe exist in Bali.

In Crystal Bay, the gigantic fish can be seen around 30 metres below the sea level. Scientists believe that the Mola Mola appears in the shallower depths in order to be cleaned by other fish. This is good news for divers as it puts the rare creature within recreational depths. The fish can often be seen slowly waving its vertical fins and eyeing divers as it makes its way around the bay. Of course, if you aren’t lucky enough to spot the Mola Mola, other pelagic species can also be seen in Crystal Bay. These include leopard sharks, whitetip sharks and eagle rays. The corals between 15 and 20 metres are gorgeous.

For all water adventurers out there, please keep in mind that this dive should only be attempted by experienced divers. Many dive shops will restrict this site to scuba divers who can prove their experience with heavy current. Be aware, the currents in the area can be very strong and downward flowing, so there is no margin for error. If you choose to attempt this dive, be sure to listen very carefully to your dive masters’ suggestions and instructions.

Dive type: Deep Drift
Difficult elements: Downward current
Required certification: Advanced Open Water
Level: Advanced
Max Depth: 40 metres
Average Visibility: 15 metres
Average Water Temperature: 22℃
Best Season: August to October
Getting There: Denpasar International Airport in Bali is the closest entry point to Crystal Bay. Once in Bali, you will need to take a taxi or public transportation to Sanur or Padang Bai. Ferries leave from both of these locations and head for Nusa Penida. However, most dive shops are located on Nusa Lemongan. You can catch a ferry to this island from the same Bali ports. From the Nusa Lembongan ferry port, head to your chosen dive shop. The dive guides will take you by boat to Crystal Bay on the west coast of Nusa Penida. 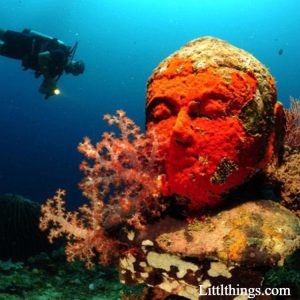 Tucked away in a hidden corner in Bali, there exists an off-the-grid masterpiece that’s doing its part to protect the environment. You may have heard of the underwater temple in Pemuteran, but what you may not know is that it isn’t a ruin at all. In fact, it’s a Biorock reef that was deliberately placed just offshore in order to promote coral growth.

The project began in 2007, and today, you’ll be able to see 10 statues and a four-metre entryway placed up to 15 metres below the surface. In just eight short years, the reef has grown a variety of soft coral and attracts a wide array of marine life. Expect to see turtles, frogfish, and nudibranchs.

Dive type: Reef
Difficult elements: Shore entry
Required certification: Open Water
Level: Beginner
Max Depth: 15 metres
Average Water Temperature: 28-29℃
Best Season: April to July; October to November
Getting There: Pemuteran can be easily reached from Denpasar International Airport. From the airport, visitors can hire private cars or minivans to take them to the northwest coast of Bali in about four hours. Alternatively, it is possible to reach Pemuteran by bemo from Denpasar. 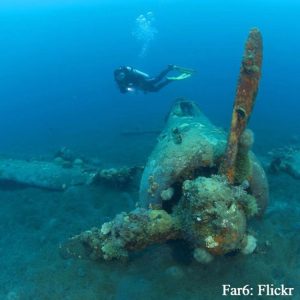 Raja Ampat is well known among divers for having some of the best dive sites in the world. But what many don’t know is that Raja Ampat is also rich in WWII history. It was here that fighter planes duked it out over the high seas, battling for the advantage of the Pacific. Of course, some of those warplanes never made it home.

Surrounding Wai Island, three sunken P47 Thunderbolt fighter planes can be found. Only one lies at a diveable depth.  The inverted plane has been lying between 26 and 33 metres below sea level since 1944. At fifteen metres long, this plane was larger than any other fighter plane of its time. Legend has it that the three P47 Thunderbolts surrounding Wai Island were returning home when they ran out of fuel. The pilots tried to save themselves by ditching near the island. No one knows if the pilots survived the crash. Today, the plane is completely covered in rocks and reef.
What marine life this dive site may be lacking (when compared to others in Raja Ampat), the rare warplane wreck makes up for in mystery and intrigue.

Dive type: Wreck
Difficult elements: Heavy current
Required certification: Advanced Open Water
Level: Advanced
Max Depth: 33 metres
Average Visibility: 30 metres
Average Water Temperature: 28-30℃
Best Season: mid-October to mid-December
Getting There: In order to access the P47 dive site, you must first fly to Bandar Udara Dominique Edward Osok Airport in Sorong. From here, catch a ferry to Wai Island or Waisai. In these locations, there are many dive centres capable of taking you to the P47 dive site. Alternatively, catch a liveaboard from Sorong in order to visit the many sites of Raja Ampat.

For the full article click on this link from TripCanvas (https://indonesia.tripcanvas.co/diving-sites-in-indonesia/). Have we got you hooked on diving then make sure to check out our diving packages on this link https://www.freme.com/diving/ . 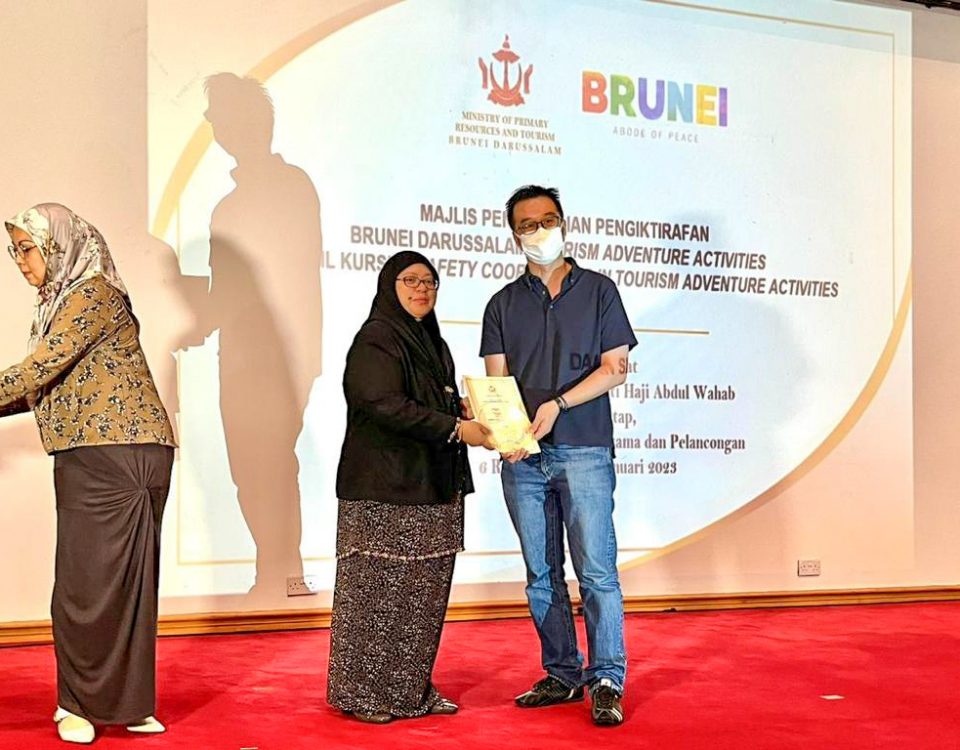 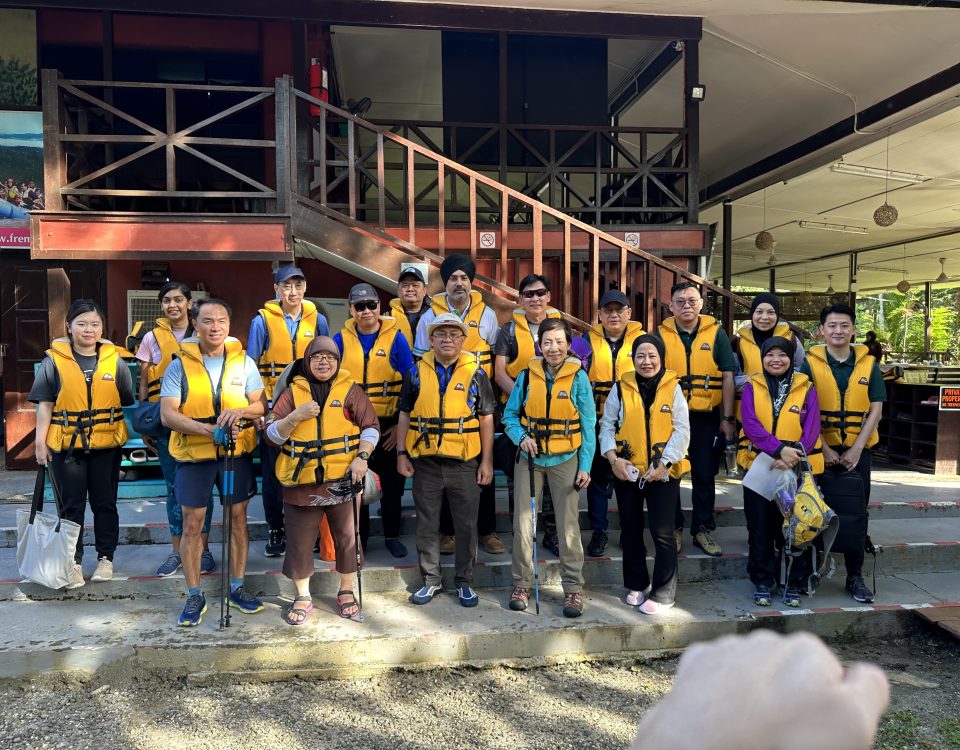 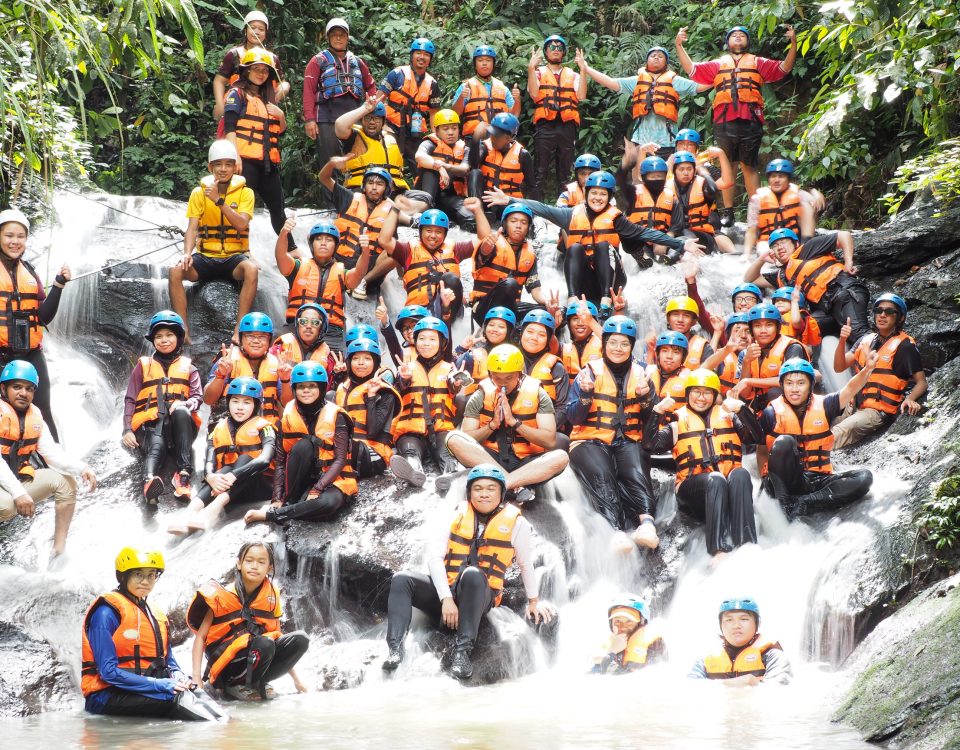 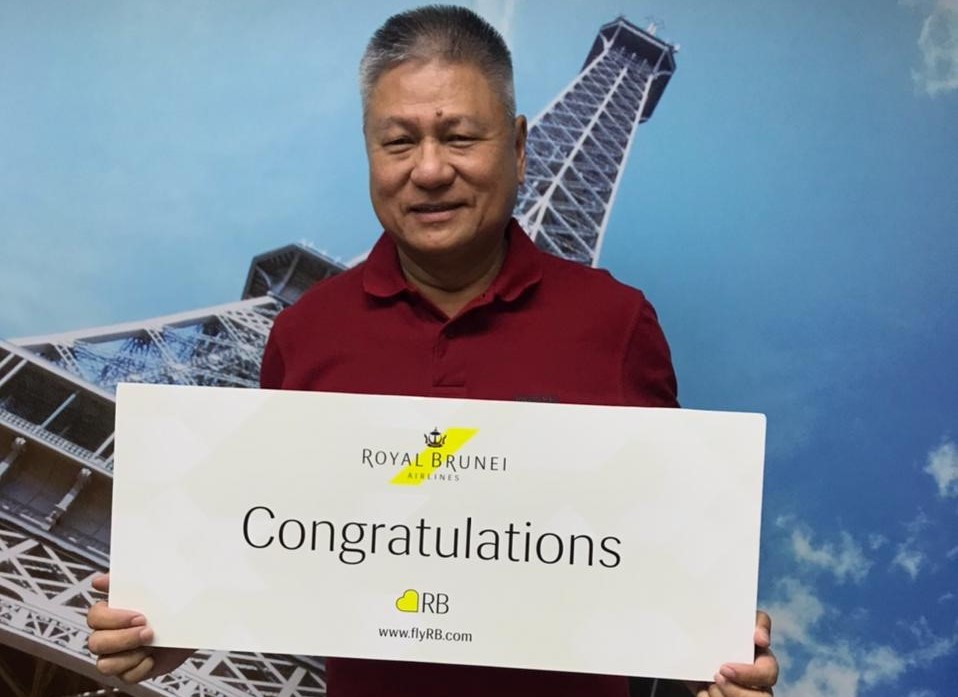